The coronavirus pandemic has limited some of the Sygnal Association’s activities. Since March, training for law enforcement agencies on the theft of intellectual property on the Internet and theft of television signals has been discontinued. The participation of Sygnal’s members in police projects has been limited. It was also not possible to organize the next editions of the conferences in Piła and Ossa. 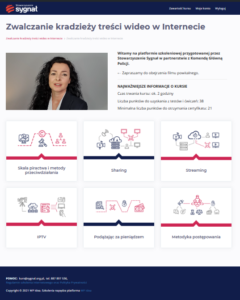 In such a situation, Sygnał took up the task of creating an online course on the training platform that could be used by police officers, which would allow the continuation of the association’s educational activities even with restrictions on meetings. The idea was approved by the Police Headquarters. Work on the course was completed at the turn of December 2020 and January 2021.

On February 13, 2020, the last training was held in Katowice as part of the nationwide training program for policemen and prosecutors under the name piracy.tv. Thus, 17 training sessions were organized in all voivodeships, in which 782 people participated. The program was implemented in cooperation with the Police Headquarters, and it was inaugurated on December 11, 2018 at the Provincial Police Headquarters in Gdańsk.

In April, Sygnał was the organizer of the campaign Thank you that # stayed at home and you are watching legal VoD availible on the platforms Ipla, Player, TVP VOD and consisting in broadcasting in the advertising block or self-promotion of a short graphic animation with the campaign slogan and logos of the participants of the campaign.

In June, at the annual meeting of members, Teresa Wierzbowska was re-elected the President of the Management Board and a new management board was elected.

Members of the Sygnal Association

Change of the registered office address

In the second quarter of the year, the seat of the Sygnal Association was changed. As part of organizing the documentation, a list of cases in which Sygnal is the addressee of correspondence from the Police, prosecutor’s office and courts was prepared.

Elections of the new authorities of Sygnal

On July 8, 2020, Zbigniew Taraś resigned from the position of a member of the management board. On August 24, 2020, the Management Board co-opted Ewa Wzięch (CANAL + Platform).

In 2020, 5 meetings of the Management Board were held, including 4 via electronic means of communication in connection with the epidemic introduced in Poland.

COOPERATION WITH OTHER ORGANIZATIONS 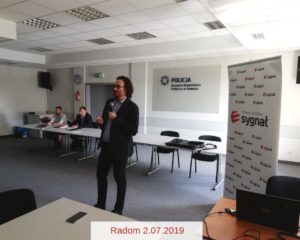 Throughout the year, we actively collaborated with representatives of other creative sectors as part of the Creative Poland Association. Together, we took positions on key issues relevant to the entire creative market.

Close cooperation took place, inter alia, with KIGEiT, where the Intellectual Property Protection Section operates, chaired by Teresa Wierzbowska, President of the Sygnal Association. The section has similar interests with the Association, which allows us to speak together and strengthen each other’s voice in public discussion.

COOPERATION WITH THE LAW ENFORCEMENT

Due to the pandemic, all training for policemen was canceled. In the first quarter of 2020, the following took place:

1 training for 45 policemen and prosecutors as part of the piracy.tv program.

1 training for 15 participants at the Police Academy in Szczytno.

Sygnal’s members supported the police raids. The largest action took place in March 2020, during which 5 places in Poland were searched: two in the Biłgoraj poviat, two in Krakow and one in Rzeszów.

March 9, 2020 – 12th Economic Forum TIME in Warsaw – The discussion panel on digital tax, digital services code and audiovisual and copyright directives was attended by the President of Sygnal, Teresa Wierzbowska.

October 15, 2020 – e-workshops on tools to fight piracy with the participation of Fabio Magagna, Product Manager Copyright Enforcement at Google and Michał Otrębski, investigator in the Antipiracy Team, Nagravison SA.

In the second half of the year, Sygnal started to create an online course on a digital training platform. The initiative was supported by the Police Headquarters. Created especially for policemen, the course includes 6 modules with 34 lessons (Piracy Scale and Methods of Counteracting, Sharing, Streaming, IPTV, Following the Money – by the members of Sygnal, and Methodology of Procedure by by the Institute of Criminal Service at the Police Academy in Szczytno), exercises and tests.

Training participants will be able to read the materials and verify the acquired knowledge at any time and place. The training will be constantly updated and expanded so that it constitutes a knowledge base useful in the daily work of policemen facing infringements of intellectual property.

In 2020, Signal, despite the pandemic, consistently developed activities as part of the “Follow the money” campaign. The most important activities within the campaign: 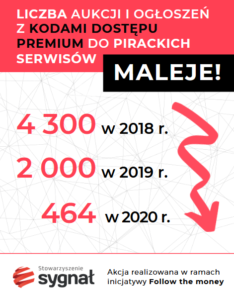 Reported Violations Table (RVT) – regular update and distribution. The new form of the table and the transparency of data placement meant that during industry meetings it is indicated as a convenient tool in the hands of advertisers.

As part of cooperation with IAB Polska, the “Brand safety” working group published the “Best Practices in the Area of ​​Brand Safety”. One of the issues discussed is brand safety in the context of advertising on pirate websites, where the activities of the Signal in the field of FTM are described.

FTM gained the support of another partner – AGB Nielsen Media Research sp.z o.o. The data provided in the RVT constitute a substantive contribution to the database of services covered by the Nielsen Audience Measurement. Ultimately, the Association will receive detailed results of the popularity of monitored pirate websites.

Discussions have been made to support advertising security to keep the Google network free from copyright infringing partners.

Activities related to cutting off payment methods in pirate websites were continued.

Cooperation with e-commerce platforms was continued, as was the on-call system for removing offers to sell access codes to pirate websites from Allegro, eBay, OLX and POKATO. The effect of applications in 2020 was the removal of 431 auctions / announcements (out of 464 found). A significant drop in the number of new offers was observed (1981 was detected in 2019, 4,278 in 2018).

August 13, 2020 – public consultation of the European Commission on a Roadmap-type document on the protection of intellectual property rights.

September 10, 2020 – public consultation of the European Commission on Art. 17 Directive on Copyright and Related Rights in the Digital Single Market.

October 17, 2020 – consultations on the draft act on radio and television broadcasting and the act on cinematography implementing the directive of the European Parliament and of the Council.

SIGNAL IN THE MEDIA

In 2020, 45 publications were published on the Signal Association and media piracy.

About the action Thank you that # stayed at home and watched legal VoD informed, among others portals wirtualnemedia.pl, press.pl, direct.pl and dorzeczy.pl.

President Teresa Wierzbowska has been quoted several times in the national press and industry portals, incl. in:

forsal.pl, Polish paradise, theft involuntarily and the renaissance of torrents. Does online piracy have a future ?, 5/04/2019

wp.pl, They pay for VOD services, but they are pirated anyway. Poland is an exception – illegal sites are weakening here, March 9, 2020.

Karolina Makowska, Member of the Management Board and Chair of the Follow the Money initiative, commented on the searches carried out by the Ukrainian cyber police in the offices of the MGID and Adwise advertising agencies (legalcontentua.org, 13/03/2020).