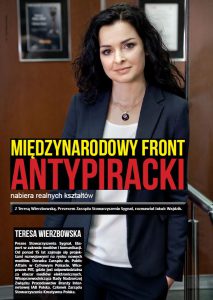 Jakub Wajdzik in his interview published in the December’s issue of  “TV Lider” talked with Teresa Wierzbowska, President of Signal piracy, problems of broadcasters and the “Warsaw Declaration” adopted after the ICPS Conference.

Jakub Wajdzik, TV Lider: It might seem that, the scale of piracy is decreasing, but the statistics tell a completely different story. What is the reason for this situation?

Teresa Wierzbowska, President of Signal: Indeed, the reports on an online piracy indicate, that the scale of using illegal content in regards to movies, TV series, music and live events is growing. Due, on the one hand, to the development of a video market and growing number of viewers of the audio-visual content, and, on the other, it is the result of the developed technical capabilities of an unlawful online content dissemination. It is estimated that in the following 5 years, the number of subscribers to illegal video content providers in Central Europe will increase from 7.1 mio to 22 mio. This poses a great challenge for the whole sector which has to convince the consumers to watch legally. It should be noted that the scope of a cybercrime is of a global nature and new technologies (e.g. IPTV television), cryptocurrencies are the new payment’s methods,   and the consequences of an absence of a uniform European substantive law open the new fronts in the battle against piracy. On the other hand however the audio-visual market is able to curbs this type of crime ever more effectively, which contributes to a better protection of a lawfully copyrighted content.

J.Wajdzik: We have more and more users of paid VOID’s services, some hosting platforms with video content were shut down, and some of them react to an unlawful download of material. We have passed a milestone in this respect. If it is so good in this respect, why is so bad?

Teresa Wierzbowska: In fact, among other things thanks to shutting down a couple of online cinemas there has been change in this regard over the last few years. Since 2017 a stagnation in the VOD’s segment can be observed. No new reputable services have emerged and the existing ones do not yet show an increase of their subscribers. This year we have noticed a decrease of linear TV services and sporting live events. To a large extent it is connected with the decision taken by one service to withdraw from sharing to the public links to the pirates’ sport’s transmissions, i.e. the decision that had been fought for by right holders for ages. Yet there are still a few popular online services, but lack of sufficient legal instruments impedes the legal entities to combat the theft of their works.