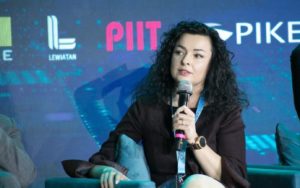 In Warsaw on March 9-10 the 12th TIME Economic Forum was held. Teresa Wierzbowska, president of Sygnał, took part in the discussion about the digital tax, the code of digital services and audiovisual and copyright directives.

In the debate on the implementation of the audiovisual directive, the most advantageous regulation implementation model was discussed, based on proven, already functioning market self-regulation. The model should be expanded to include new entities that will be covered by the regulation of the Broadcasting Act, such as video content distribution platforms. When talking about the copyright directive, it was pointed out that the lack of implementation of mechanisms to better protect content results in enormous costs for the victims of the piracy.

The discussion also pointed to the need to take into account the interests of Polish entrepreneurs and the Polish market when implementing the entire package of new regulations so as to harmonize competition conditions between local players and international entities that often escape national requirements.

The forum was organized by KIGEiT – Polish Chamber of Commerce for Electronics and Telecommunications.